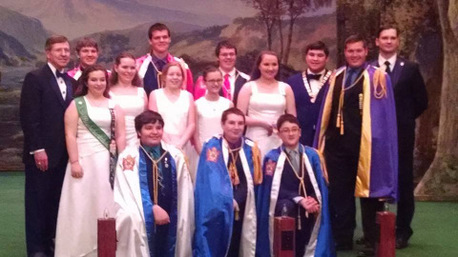 Michael L. Wiggins, Grand Master of Masons in Texas with John Wayne Chapter, Pearland Rainbow Assembly and Harmony Lodge WM Eric Walker.
Galveston, TX - January 30, 2015  Seven members of the Chapter and five members of Pearland Rainbow Assembly #337 made a big splash, as they helped out in numerous ways with the 175th Anniversary of the founding of Harmony Lodge # 6 A.F. & A.M., which was chartered back in 1840 in the Republic of Texas.  After Grand Master, Michael L. Wiggins, talk to the gathered crowd in the dining hall, everyone retired to the auditorium, where the DeMolays and Rainbows put on a great display.  Senior Councilor, Caleb Lamb, started things off with a enthusiastic performance of the DeMolay Ceremony of Light.  That was followed by a great Flower Talk delivered by Master Councilor, Colin Lamb, which was followed by the Masonic Ribbon Ceremony, given by Texas Rainbow Grand Chaplain, Claire Peebler. 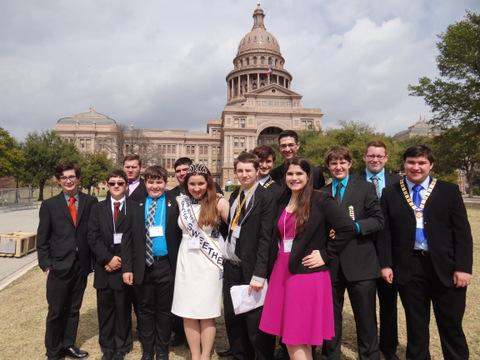 Austin, TX - February 21, 2015  Eleven members of the Chapter along with the Chapter Sweetheart and Chapter Duchess were heavily involved in the House and Senate actions of the annual Texas DeMolay Government Day at the State Capitol this past weekend.  The Senate went into Session Saturday morning with our very own Texas Deputy State Master Councilor, Tony Peebler, at the helm as President of the Senate.  John Wayne members were very active in all of the debates in the House and Senate, and while we did not win best delegation again, we did have two members stand out.  Pedro Garcia, Jr. won Best House Delegate Junior Division, while Christopher Little won Best Senate Delegate Senior Division. Ted Frick, as usual, was behind the scenes everywhere at once, motivating the delegation to great things.  Everyone had a great time. 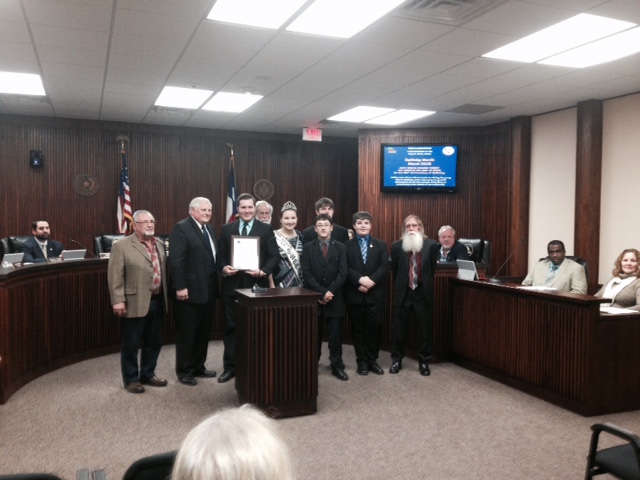 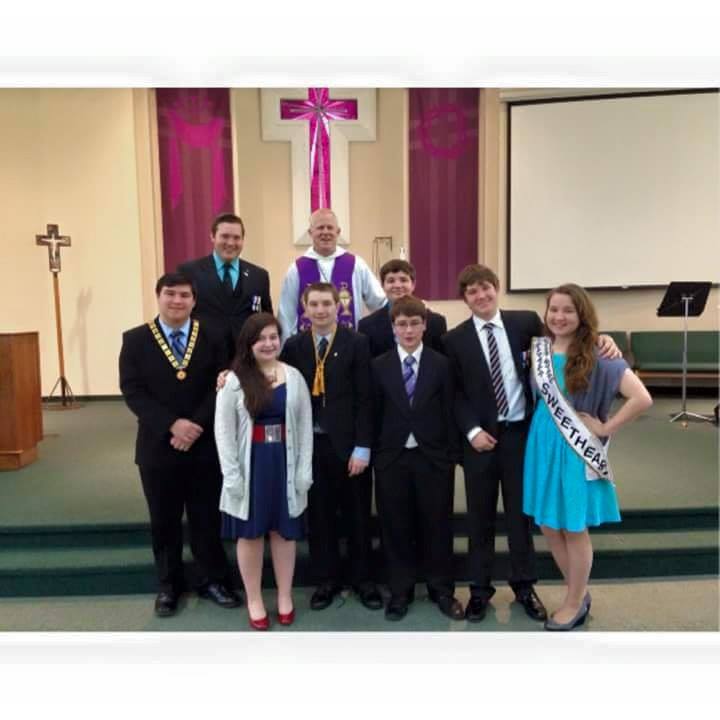 Alvin, TX - March 15, 2015  Several members of the Chapter along with the Chapter Sweetheart, Claire Peebler,  celebrated DeMolay Sunday by attending services at the First Lutheran Church of Alvin. 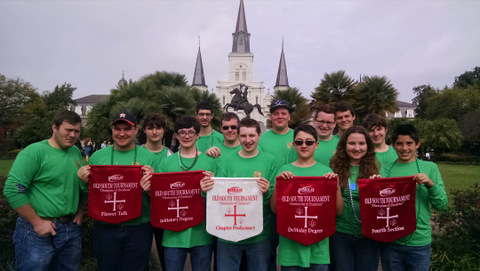 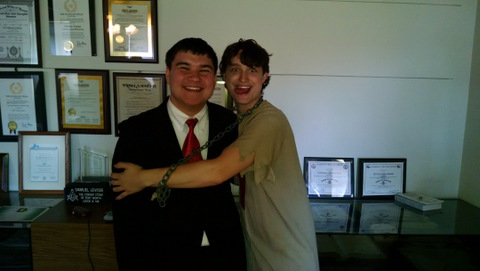 Fort Worth, TX - March 29, 2015  Two long time ritualists from John Wayne said farewell to competition at the 25th Annual Frank Marshall Championship Tournament this past weekend, and while all did not end as planned, the Chapter made more friends and deposited more memories in the memory bank.  While falling just short again in the Championship Level DeMolay Degree competition, the Chapter did win the Open Level Chapter Proficiency Championship for the second year in a row.  Also, Tony Peebler won the Championship Level Magnificent 7 Banner for the very first time.  All in all, everyone had a great time, and are already talking about next year. 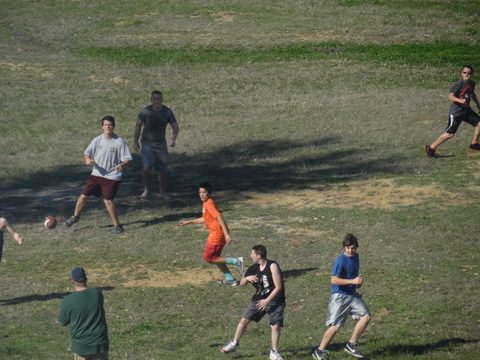 Nothing like a little football in front of the hotel to relieve the stress of ritual competition. 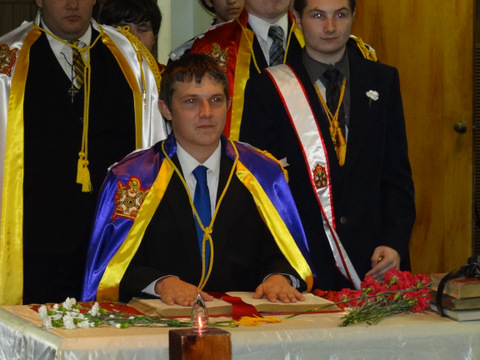 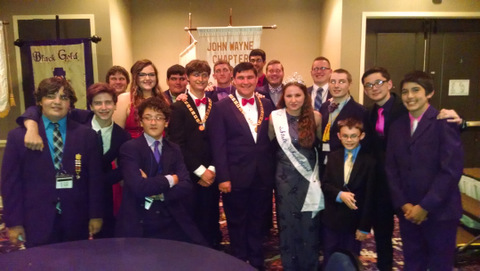 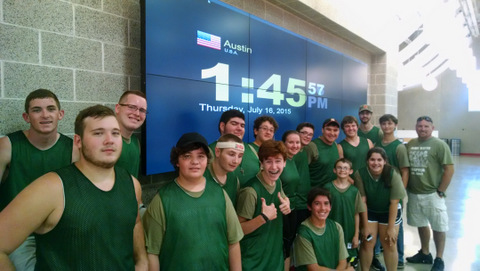 Austin, TX - July 19, 2015  Yesterday, our very own Tony Peebler from John Wayne Chapter, was installed as the 86th State Master Councilor of Texas DeMolay.  He is the first member of John Wayne (formerly LaPorte) Chapter to become State Master Councilor.  Tony is a home school graduate, and will be entering the Dwight Look College of Engineering at Texas A & M University in College Station, Texas this fall.  Before then, Tony will be representing Texas DeMolay at the week long DeMolay Leadership Conference (DLC) in Northeastern Oklahoma, followed by an immediate trip to St. Louis, Missouri for a week long conference at the Missouri University of DeMolay, followed immediately by another trip to the KeyMan DeMolay Conference in Elizabethtown, Pennsylvania.  Arriving back in Texas in mid August, he will have around 7 days before leaving for College Station.  Congratulations Tony! We are proud of you at John Wayne. 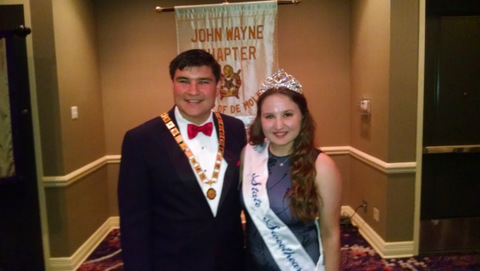 Austin, TX - July 19, 2015  When Tony Peebler was installed as the 86th Texas DeMolay State Master Councilor, and his little sister, Claire Peebler was installed as the Texas DeMolay Sweetheart, it was the first time since 1995 that a brother sister combination held those offices together.  In 1995, that combo was Alan Baily as State Master Councilor and Elizabeth Baily as State Sweetheart. 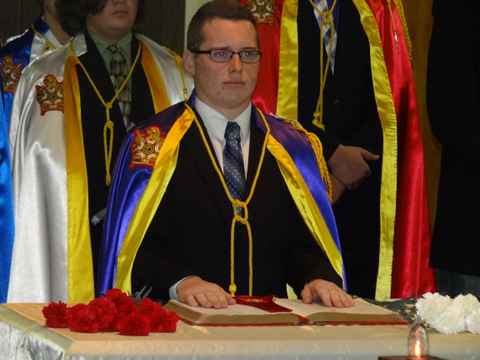 Master Councilor Joel Fulcher IV
Alvin, TX - November 21, 2015  Joel (Jae) Fulcher IV and his officer corps were installed this evening in front of large crowd at Alvin Lodge.  They will lead the Chapter through the coming winter and spring.  Jae is a senior at Clear Creek High School., and is on the football team.  He is the son of Joel (Joe) Fulcher III, and the grandson of Joel Fulcher, Jr. Other officers installed were Senior Councilor, Earl Deshazer, Junior Councilor, Galen Mikel, Senior Deacon, Robert Deshazer, Junior Deacon, David Lombard, Senior Steward, Lawson Godinez, Junior Steward, Jose Garcia, Chaplain, Tristan Arnold, Marshal, Antonio Sifuentes, Scribe, Colin Lamb, Standard Bearer, Andrew Luke, and Sentinel, Caleb Lamb.  The installation team was led by DSMC of Texas, Christopher Little as installing officer, and included the following members: Austin Warren of Reagan Chapter as the installing senior councilor, DDSMC-5 Ted Frick as the installing junior councilor, John Wayne PMC Tim Lane II as installing marshal, Pedro Garcia as installing senior deacon, and PDDSM-5 Andy Nitsch as the installing chaplain.  The installation of officers was followed by presentations of Flower Talk and the Ceremony of Light, presented by Colin Lamb and Caleb Lamb, respectively.  Ms. Briana Godinez of Pearland was crowned as the 4th Chapter Sweetheart of John Wayne Chapter #3667 during the Alvin era by Texas State Sweetheart Claire Peebler. There was a short reception followed by the Sweetheart's Ball in honor of Ms. Godinez.  A great time was had by all, and the Chapter is off to a good start for the coming term. 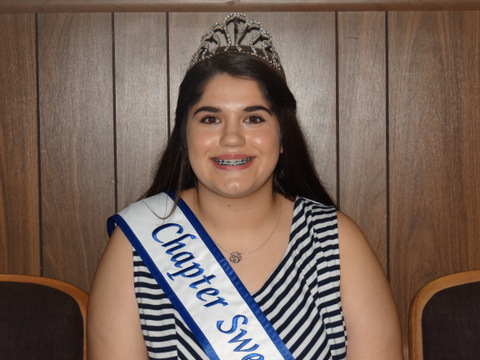 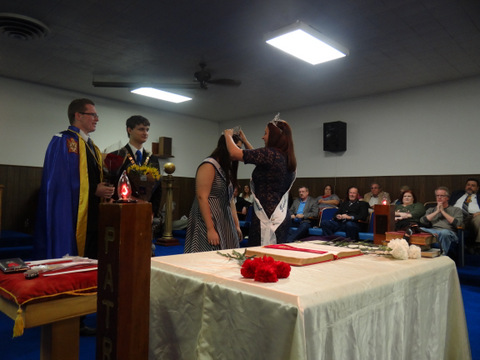 Alvin, TX - November 21, 2015  Tristan Arnold has completed all of the requirements for the DeMolay Letterman Varsity Award, and was awarded his DeMolay Varsity Letter and certificate from DeMolay International.  The award was presented by Chairman of the John Wayne Chapter #3667 Advisory Council, Dad Chris Little. 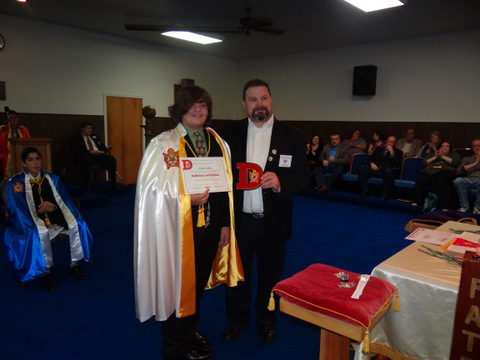