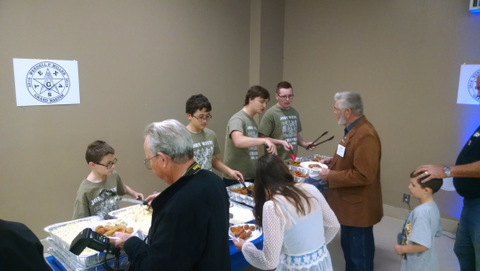 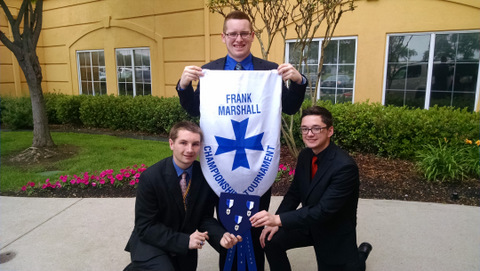 Bruceville, TX - May 16, 2016  Ten members of the Chapter along with our Chapter Sweetheart and our State Sweetheart traveled to Camp Greene for the annual Masonic Youth Weekend.  This year was more exciting than ever thanks to the efforts of our very own SMC Tony Peebler along with the Rainbow GWA, Ms. Emily Cumming.  Along with introducing new activities like "Human Foosball" (pictured below), they expanded the teams from 4 to 8 so that everyone got a chance to participate in the games and activities.  A great time was had by all, and many new friends were made across the great State of Texas.  Members attending were SMC Tony Peebler, DSMC Chris Little, DDSMC-5 Ted Frick, Tim Lane II, Antonio Sifuentes, Caleb Lamb, Andrew Luke, Galen Mikel, Lawson Godinez, and Derrick Theiss. Chapter Sweetheart Briana Godinez and Texas State Sweetheart Claire Peebler were also in attendance. 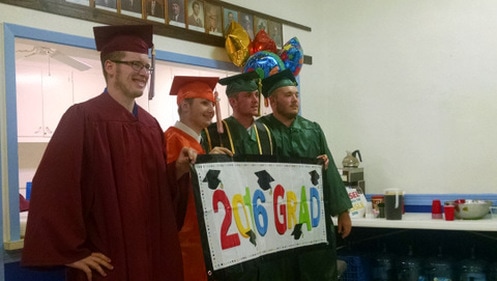 Graduating Seniors Fulcher, Mikel, Zornes, and Lamb
Alvin, TX - June 1, 2016  This year, John Wayne Chapter has four graduating seniors.  They are Joel Fulcher who graduated from Clear Creek High School, Colin Lamb from Santa Fe High School, Galen Mikel from Alvin High School, and Josh Zornes from Santa Fe High School.  Brothers Fulcher and Mikel will remain in the area while attending local junior colleges.  Brother Lamb will attend Lyon College in Arkansas and play football for them. Brother Josh Zornes is joining the United States Army and will begin boot camp later this month.  We wish them the best in life, and hope they always come back to visit.

Waco, TX - July 31, 2016  A whirlwind conclave for John Wayne ends in triumph as the 86th Texas DeMolay State Master Councilor, Tony Peebler (John Wayne Chapter), passed his collar to the 87th Texas DeMolay State Master Councilor, Christopher Little (John Wayne Chapter).  The Conclave also witnessed the retirement of Claire Peebler, who was the 2015-2016 Texas State Sweetheart, but also witnessed the hard fought election of our very own Ted Frick as the 2016-2017 Texas State Junior Councilor.  Little has been with John Wayne Chapter since its rebirth in Alvin, and has been instrumental in its growth since that time.  He is a graduate of Alvin High School and is currently taking college courses.  He has twice been master councilor of the Chapter, holds the PMC-MSA, Founders Medal, Blue Honor Key and Lamp of Knowledge.  He is a past illustrious knight commander of San Jacinto Priory, and holds the rank and distinction of a Chevalier.  Brother Frick was a charter member of Dixon Squire Manor, and served as its first master squire, earning every award available.  He is also a PMC-MSA, RD, and Lamp of Knowledge, and is currently serving his second term as master councilor of the Chapter.  He is a student at Turner High School in Pearland.  In addition to these high offices, the athletic and ritual teams made their presence known.  In sports, the John Wayne Junior and Senior Volleyball teams both won championships.  The basketball team came close, but ended up in second place at the end of the day.  In flag football, the team was unfortunately eliminated in the second round of play.  In ritual, the teams scored much better, winning championships in Chapter Proficiency, Initiatory Degree, and 4th Section.  They also came in second place in the DeMolay Degree.  In individual contests, Ted Frick walked away with championships in the 1st, 3rd, and 5th Preceptor parts as well as the Senior Deacon, Initiatory Degree.  Jae Fulcher walked away with first place as Master Inquisitor, and Colin Lamb won first place as Junior Inquisitor.  Caleb Lamb came in second place in the Orator competition. 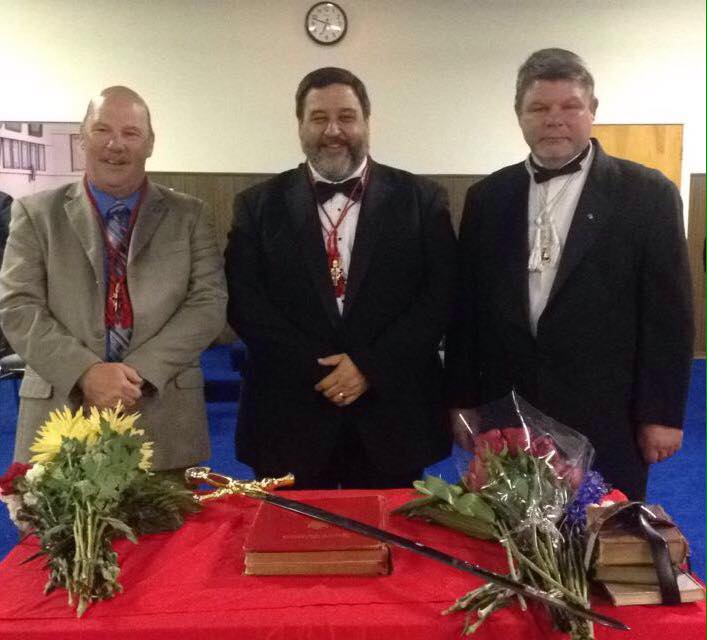 In a ceremony at Alvin Lodge on August 14, 2016, Dad Peebler, along with Pasadena Chapter Advisor Shannnon Nitsch and Teddy Roosevelt Chapter Chairman Keith Orrisson, were invested with the DeMolay Legion of Honor. 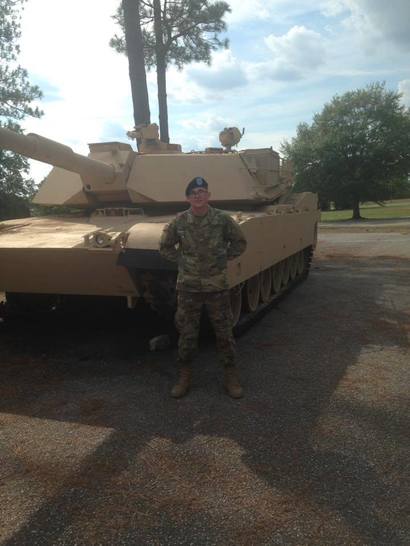 Congratulations to Brother Josh Zornes, on his completion of U.S. Army Basic Training. 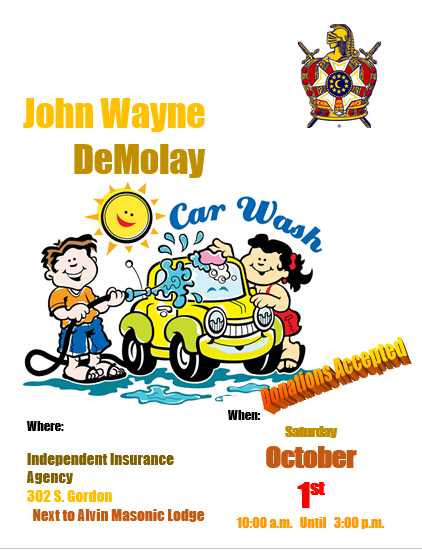 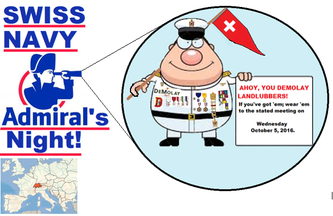 ​At the stated meeting of October 5, 2016, you are encouraged to wear every DeMolay Award that you have earned.  Who has the most hardware?
​ 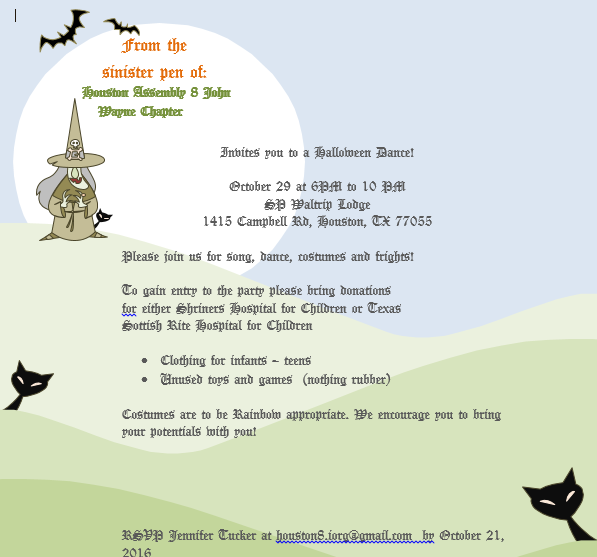 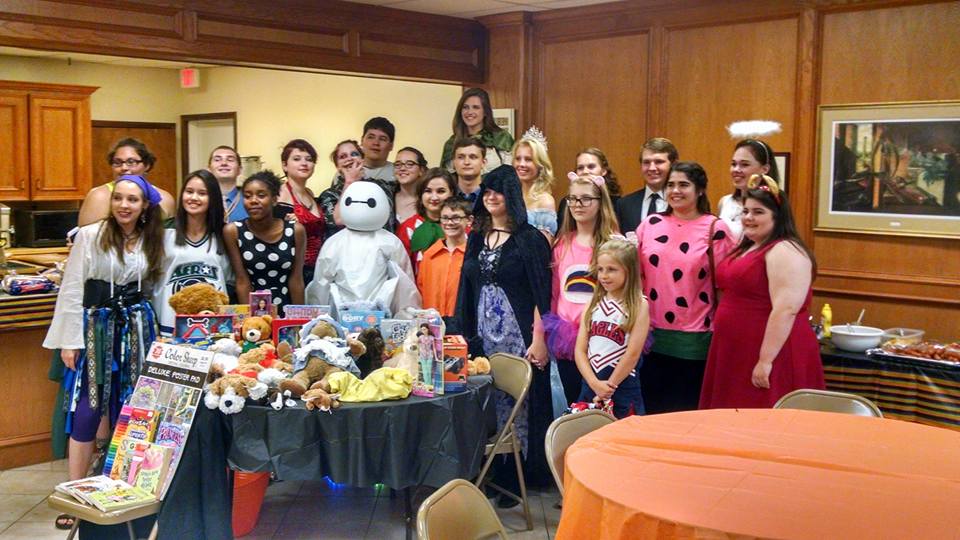 Alvin, TX - November 19, 2016 Brother Tim Lane II received his DeMolay Majority Service this evening after almost 5 years of faithful service to the Chapter and to the Order.  Brother Lane was initiated on November 30, 2011 in John Wayne Chapter.  He quickly rose through the ranks, and served as Master Councilor in the Spring Term of 2013.  He was the Orator on the 2013 State Champion John Wayne DeMolay Degree Team.
This website is the official website of John Wayne Chapter#3667 Order of DeMolay and acknowledges the authority of and yields allegiance to DeMolay International, of which Frank S. Land was the founder.