Coming Through The Pandemic
In May 2021 John Wayne Chapter No. 3667 Began Meeting In Person Again

Alvin, TX - May 10, 2021  Five members were on hand this evening to talk with, listen to, and present gift snack bags to Detective Ruben Solano of the Alvin Police Department.  The chapter made 80 snack bags for the Police Department (one for every officer and staff) to show our appreciation for their service.  Detective Solano made a great presentation, followed by a great questions and answers session.  During the week, the chapter posted photos and biographies of two officers each day of the week (May 9-15) who were killed in the line of duty, one from the past, and one from 2021. 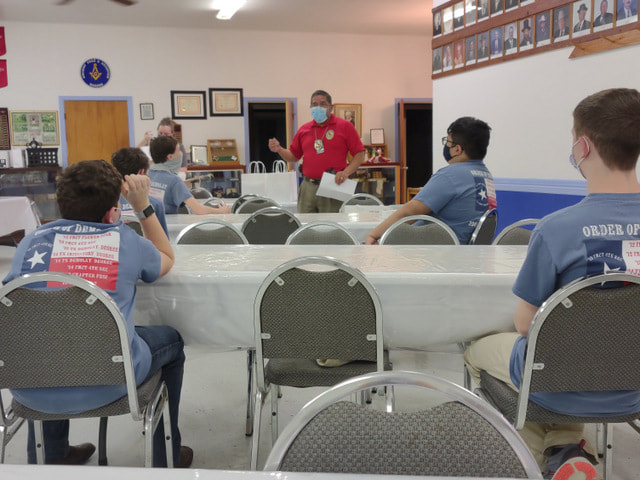 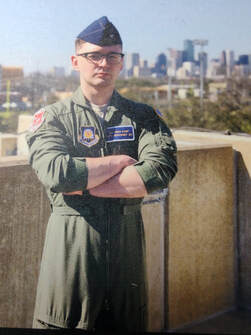 lHouston, TX - May 15, 2021  Ted Frick, who only became a Senior DeMolay earlier this year, has graduated Magna Cum Laude with a Bachelor of Arts in Political Science from the Universtiy of Houston.  He has also commissioned in the United States Air Force as a second lieutenant.  He is set to train as  an Air Battle Manager at Tyndall AFB, Florida.  Ted is a charter member of William A. Dixon, Jr., Squire Manor #3, and was the inaugural master Squire of that manor back in 2011.  He earned all four of the squire badges available, and numerous merit stars.  He also completed his Representative Squire Award (his baldric, RSA, and awards are now on display in the Chapter Trophy Case).  The following year, Ted joined John Wayne, and the rest is history.  He returned both of his obligations that same year, and by the end of the next year, he had completed all five of his LCC Leadership Courses, earning his Lamp of Knowledge.  He later earned his Representative DeMolay Award (RD), and served John Wayne 3667 twice as master councilor.  He earned his Past Master Councilor's Meritorious Service Award, became a part of the John Wayne 3667 ritual teams, finishing no less, as Jacques DeMolay, the longest part.  He was instrumental in the Chapter winning back to back Texas DeMolay Degree Championships in 2013 and 2014.  In 2014 and 2016, Ted was a co-leader of the John Wayne 3667 delegation at Government Day, which won Best Delegation in both of those years.  In 2016, his speaking prowess actually earned him Best House Delegate for that year.  Over the years, Ted took part several times in the Great Plains DLC in Oklahoma, and we would be remiss if we failed to mention that he won the Madden Football Tournament once (that's out of a field of 128 competitors).  In 2015-2016, he served Texas DeMolay as the District Deputy State Master Councilor for District 5 (Houston Area).  In 2016-2017, he was elected as State Junior Councilor of the Texas DeMolay Association, and served with distinction that year.  Unfortunately for Texas DeMolay, Ted chose to focus on his college courses instead of further advancing in DeMolay.  That wise decision clearly shows in his GPA.  It is our loss, but our country's gain.  God Speed Second Lieutenant Frick, in all that you do.  You showed 'em how it's done!

Fort Worth, TX - July 18, 2021  Five members of the chapter, Peter Luke, Garrett Priddy, Eli Vandewater, Andrew Luke, and Kyle Villanueva, along with our Chapter Sweetheart, Ms. Heidi McMillan, traveled to Cow Town for the first in person Texas DeMolay Conclave in two years.  On Thursday afternoon, they played against Nederland Chapter in flag football.  They followed that with a dodge ball match against Grand Prairie Chapter, and came away with the Junior Division Dodge Ball Championship.  Early Friday morning, Garret Priddy played singles tennis against Two Rivers, and ended up with a second place medal for his efforts.  Later that morning John Wayne played 3 on 3 basketball against Two Rivers Chapter.  Friday afternoon, the group enjoyed some relaxing time at the pool, before attending the hamburger social that evening.  Friday night, John Wayne joined the rest of the State and held their annual caucus, electing the 2021-2022 Texas DeMolay State Officers as follows, State Master Councilor, Christian Coleman, Deputy State Master Councilor, Layton Richards, State Senior Councilor, our very own Kyle Villanueva, and Tyler Coperhaven as the State Junior Councilor.  Ms. Lillian McMann was elected Texas DeMolay Sweetheart.  They were all installed and crowned Saturday evening after the Grand Banquet, but before the awesome dance held that night.  Earlier that day, all of the members competed individually in esoteric work, some of them for the very first time.  They all learned a lot, and even managed to win a few competitions.  Our Fourth Section Team of Kyle Villanueva, Peter Luke, and Andrew Luke, won the State Championship again.  This is the second time for Peter and Kyle.  Kyle won the State Championship for Magnificient Seven, and came in Second place for Flower Talk.  Everyone greatly improved their ritual skills, and we definitely have something to build on.  Dad Peebler was very happy and proud of all of them.  John Wayne Chapter capped off Saturday night by having an absolute blast at the dance.  Thanks to all of the advisors and parents who made this trip possible, Camille Luke, John Vandewater, Rusty Kattner, Marlon and JoAnn Villanueva, and Marvin Priddy. 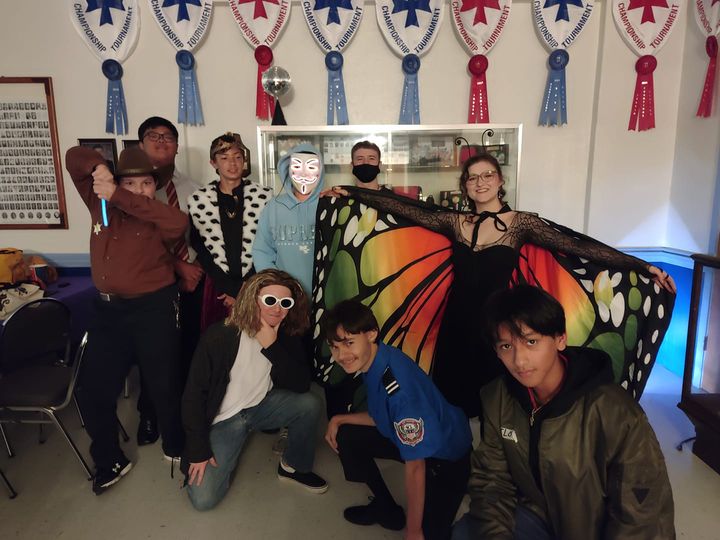 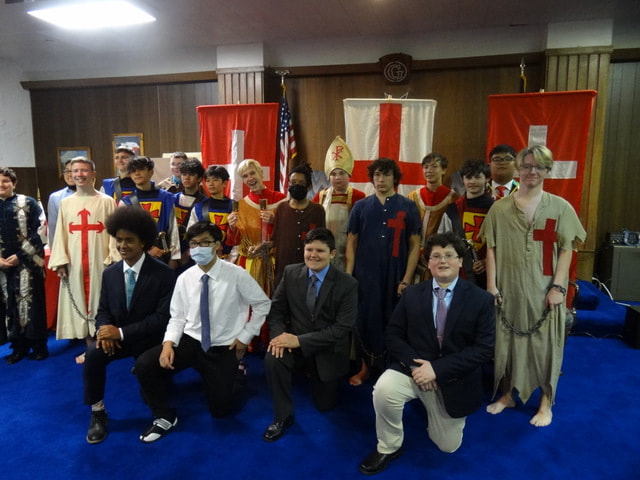 Alvin, TX - November 21, 2021  A large crowd showed up this evening at Alvin Lodge No. 762 A.F. & A.M. to see Spencer Eddins and his officer corps installed at the Fall 2021 Installation of Officers.  The Installing Officer was Texas DeMolay State Master Councilor, Chipper Coleman, from Albert Pike Chapter in San Antonio.
Spencer is the son of Jason and Britnie Eddins of Alvin.  He is a student at Alvin High School, and a member of the Alvin High School United States Marine Corps Junior ROTC.  Other officers installed were Senior Councilor, Eli Vandewater, Junior Councilor, William Baisch, Senior Deacon, Garrett Priddy, Junior Deacon, Mikel Yap, Scribe, Peter Luke, Senior Steward, Mason Saunders, Junior Steward, Zachary Miller, Chaplain, Kyle Villanueva, and Standard Bearer, Andrew Luke.
​ Peter Luke, who guided the Chapter through the last half of the COVID-19 Pandemic, received the DeMolay of the Term Award.  Ten year DeMolay Service Awards were presented to Brothers Galen Mikel, Tony Peebler, and Chris Little, all members of John Wayne Chapter No. 3667.  In addition, several members of Galveston Chapter received their 50 Year DeMolay Service Awards.  They included Albert Crawford, PMC of Galveston Chapter and Past Master of Tucker Lodge No. 297 A.F. & A.M., Gus and Stanley Marinos, PMCs of Galveston Chapter, and Charles Cupples, PMC of Galveston Chapter and Past Master of Sugar Land Lodge No. 1141 A.F. & A.M.  The family of the late Charles Erick Ekelund, PMC of Galveston Chapter, was also on hand for the dedication of the Charles Erick Ekelund Memorial Scholarship for DeMolays from John Wayne Chapter No. 3667.  Albert Crawford, Jr., Past Master of Tucker Lodge No. 297 A.F. & A.M., made a presentation on behalf of that Lodge of a check for $1,000 to the scholarship fund.  After the ceremonies, there was a great reception with great food, followed by a dance.  Everyone had a grand time. 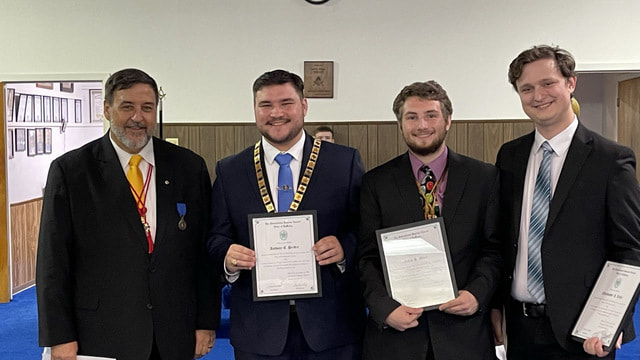 Alvin, TX - December 18, 2021  Zachary Miller and Mason Saunders were named today as the Co-Editors of the John Wayne Chapter No. 3667 Sentinel.  Congratulations to both.  We are looking forward to some great publications.