Flower Power, Mother's Club's, and the rest!  Our very first scrapbook starts on day one, August 22, 1970, with our first installation of officers and our Letters Temporary.  The scrapbook has been scanned into ten sections as PDF documents to make it easier to view.  Each section is in chronological order and follows the original scrapbook page for page.  The scrapbook ends in the year 1976. 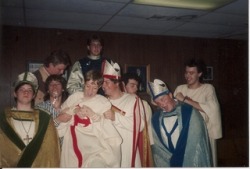 John Wayne DeMolay Degree Team 1989
The chapter moved to Seabrook in 1985 and was renamed John Wayne Chapter, and thrived in the late 1980's and early 1990's.   The chapter membership fluctuated during the mid to late 1990's, some better than others, until declining around the year 2000.  The chapter then moved to the Friendswood area and did well for the next several years until declining again in 2007.  With the sponsorship of Alvin Lodge #762 A.F. & A.M. in late 2009, the chapter was moved to Alvin in 2010.

John Wayne Chapter Delegation Texas Government Day 1989
Chapter history before 2010 is sketchy, but we are trying to fill in the gaps.

In 1990, John Wayne Chapter was awarded the "Best Delegation" at the Texas Government Day!

The Chapter Moves To Friendswood, Texas

This website is the official website of John Wayne Chapter#3667 Order of DeMolay and acknowledges the authority of and yields allegiance to DeMolay International, of which Frank S. Land was the founder.