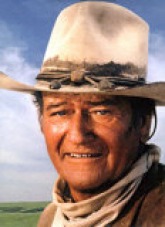 Marion Mitchell Morrison (May 26, 1907 – June 11, 1979), born Marion Robert Morrison and better known by his stage name John Wayne, was an American film actor, director and producer. He epitomized rugged masculinity and has become an enduring American icon. He is famous for his distinctive voice, walk and height. He was also known for his conservative political views and his support from the 1950s for anti-communist positions.

A Harris Poll released January 2009 placed Wayne third among America's favorite film stars, the only deceased star on the list and the only one who has appeared on the poll every year since it first began in 1994.

In 1999, the American Film Institute named Wayne 13th among the Greatest Male Stars of All Time. 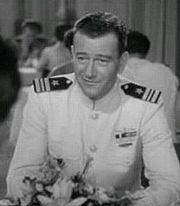 Wayne was born Marion Robert Morrison in Winterset, Iowa.  His middle name was soon changed from Robert to Mitchell when his parents decided to name their next son Robert. (Years later, after Wayne became an actor, a publicist's error referred to his "real" name as Marion Michael Morrison instead of the correct Marion Mitchell Morrison. This error infected virtually every biography of Wayne until Roberts & Olson uncovered the facts in their biography John Wayne: American, drawing on the draft of Wayne's unfinished autobiography, among other sources.)

Wayne's father, Clyde Leonard Morrison, (1884–1937) was the son of American Civil War veteran Marion Mitchell Morrison (1845–1915). His mother, the former Mary Alberta Brown (1885–1970), was from Lancaster County, Nebraska. Wayne was of Presbyterian Scots-Irish descent through his 2nd great-grandfather Robert Morrison born in County Antrim, Northern Ireland, in 1782 who then emigrated to the United States.

Wayne's family moved to Palmdale, California, and then in 1911 to Glendale, California, where his father worked as a pharmacist. A local fireman at the station on his route to school in Glendale started calling him "Little Duke", because he never went anywhere without his huge Airedale Terrier dog, Duke. He preferred "Duke" to "Marion," and the name stuck for the rest of his life.

As a teen, Wayne worked in an ice cream shop for a man who shod horses for Hollywood studios. He was also active as a member of the Order of DeMolay, a youth organization associated with the Freemasons. He was initiated into Glendale Chapter Order of DeMolay in 1924.  He attended Wilson Middle School in Glendale. He played football for the 1924 champion Glendale High School team. Wayne applied to the U.S. Naval Academy, but was not accepted. He instead attended the University of Southern California (USC), majoring in pre-law. He was a member of the Trojan Knights and Sigma Chi fraternities. Wayne also played on the USC football team under legendary coach Howard Jones. An injury curtailed his athletic career; Wayne later noted he was too terrified of Jones' reaction to reveal the actual cause of his injury, which was bodysurfing at the “Wedge” at the tip of the Balboa Peninsula in Newport Beach. He lost his athletic scholarship and, without funds, had to leave the university.

Wayne began working at the local film studios. Prolific silent western film star Tom Mix had gotten him a summer job in the prop department in exchange for football tickets. Wayne soon moved on to bit parts, establishing a longtime friendship with the director who provided most of those roles, John Ford. Early in this period, Wayne appeared with his USC teammates playing football in Brown of Harvard (1926), The Dropkick (1927), and Salute (1929) and Columbia's Maker of Men (filmed in 1930, released in 1931). 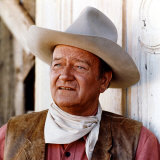 Wayne claimed in his Playboy interview to have been a socialist during his years at college, and he admitted voting for Democratic President Franklin D. Roosevelt in the 1936 presidential election. In the same interview he also expressed admiration for Democratic President Harry S. Truman. However, for most of his career he was a vocal conservative Republican. He took part in creating the Motion Picture Alliance for the Preservation of American Ideals in February 1944 and was elected president of that organization in 1947. He was an ardent anti-communist, and vocal supporter of the House Un-American Activities Committee. In 1952, he made Big Jim McLain to show his support for the anti-communist cause. A supporter of Vice President Richard Nixon's candidacy in the United States presidential election in 1960, he expressed his vision of patriotism when John F. Kennedy won the election: "I didn't vote for him but he's my president, and I hope he does a good job."

Wayne used his iconic status to support conservative causes, including rallying support for the Vietnam War by producing, co-directing, and starring in the critically panned The Green Berets in 1968. In the mid-1970s, however, he went against fellow conservatives by supporting the Panama Canal Treaty.

Due to his enormous popularity, and his status as the most famous Republican star in Hollywood, wealthy Texas Republican Party backers asked Wayne to run for national office in 1968, as had his friend and fellow actor, Senator George Murphy. He declined, joking that he did not believe the public would seriously consider an actor in the White House. However, he did support his friend Ronald Reagan's runs for Governor of California in 1966 and 1970. In 1970, he received the DeMolay Active Legion of Honor.  He was also asked to be the running mate for Democratic Alabama Governor George Wallace in 1968. Wayne vehemently rejected the offer. Wayne actively campaigned for Richard Nixon, and addressed the Republican National Convention on its opening day in August 1968. Wayne also was a member of the conservative and anti-communist John Birch Society.

Soviet documents released in 2003 reveal that, despite being a fan of Wayne's movies, Joseph Stalin ordered Wayne's assassination due to his strong anti-communist politics. Stalin died before the killing could be accomplished. His successor, Nikita Khrushchev, reportedly told Wayne during a 1958 visit to the United States that he had personally rescinded the order.

In 1986, John Wayne was posthumously inducted into the DeMolay Hall of Fame as part of the inaugural class. 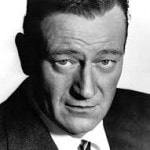 This website is the official website of John Wayne Chapter#3667 Order of DeMolay and acknowledges the authority of and yields allegiance to DeMolay International, of which Frank S. Land was the founder.