Alvin, TX - May 16, 2018  Six members of John Wayne Chapter put on both degrees for the newest DeMolay in Texas, Spencer Eddins.  Welcome Spencer! 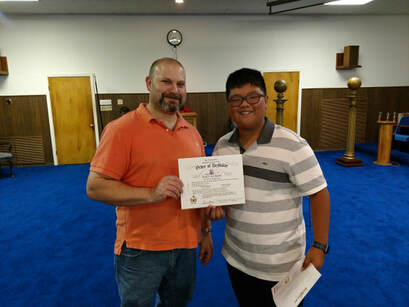 Waco, TX - July 22, 2018  Four members of John Wayne Chapter #3667 attended the 88th Annual Texas DeMolay Conclave here over the past week.  The members attending were Galen Mikel, Jae Fulcher, Andrew Luke, and Tony Peebler.  Former Chapter and State Sweetheart, and current Grand Worthy Advisor of Texas Rainbow for Girls, Claire Peebler, was also there to support the chapter. Though few in number, the Chapter made a big impact on Conclave.  Our 3 man basketball team came in second place after losing an 18-15 halftime lead due to exaustion in the finals versus Black Gold Chapter, and then losing the game 32-26.  Doing better in ritual competition, our 4th Section Team, led by Brother Jae Fulcher this year, won the Texas State Championship for the 3rd time in a row, and the for the 7th time in 8 years.  Other members of the 4th Section Team were Brothers Tony Peebler and Galen Mikel.  Brother Fulcher also came in second place in the best part competition for Master Inquisitor, while Galen Mikel won the best part for Junior Inquisitor.  Brother Mikel was also appointed by incoming Texas State Master Councilor, Noah Blair, to serve as the District Deputy State Master Councilor for District 5 for 2018-2019.  We closed out the great weekend with a lunch on the way  home at the Dixie Cafe in Hearne, TX.

4 Chapters Come Together To Create
A New DeMolay!

Alvin, TX - August 25, 2018  Members of four District 5 & 6 chapters came together Saturday to put on both degrees for the newest DeMolay in Texas, Peter Luke.  The chapters supplying members for the degree teams were John Wayne, Lionheart, Nederland, and Reagan.  A huge thanks to the brethren that traveled down to Alvin to help out with these degrees.
​ 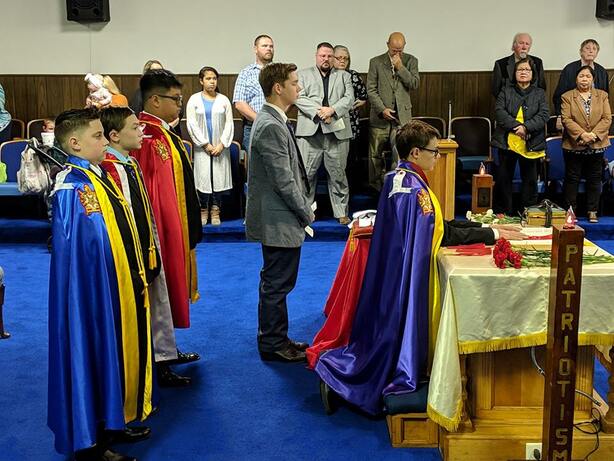 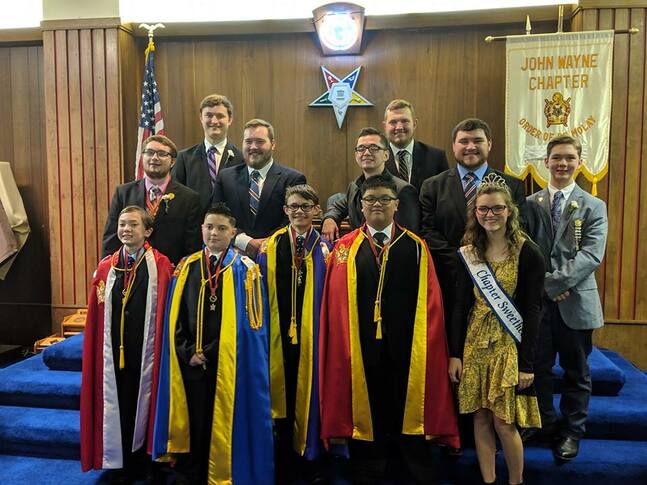 The End Of An Era

Alvin, TX - December 22, 2019  After nine amazing years, the two founding members of John Wayne Chapter #3667 at Alvin, Texas have reached majority.  Today, they celebrated their many accomplishments together, and left the Crown of Youth behind.  A large crowd was on hand, and light refreshments were served after the ceremony. 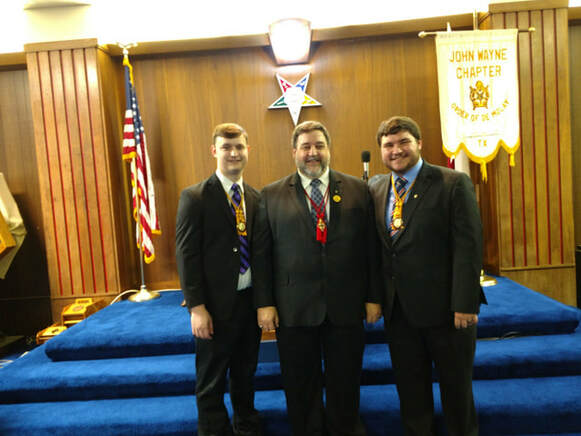 L-R Christopher Little, Dad Peebler, Tony Peebler
This website is the official website of John Wayne Chapter#3667 Order of DeMolay and acknowledges the authority of and yields allegiance to DeMolay International, of which Frank S. Land was the founder.