History of the Order of DeMolay   One Man and Nine Boys 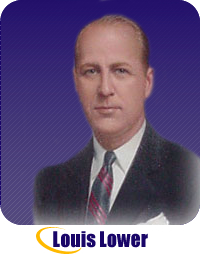 It has been said that a day can be changed or a great moment launched by a single phone call.

Such a call came in January of 1919. As Frank answered the telephone he recognized the voice of Sam Freet, newly installed Senior Warden of Ivanhoe Lodge. "Frank, I have a favor to ask. One of our members, Elmer E. Lower, who had been initiated as a Fellow Craft, died a year ago. Could you find a part-time job for the oldest boy, Louis? He is one of the finest young men I have ever seen.

"Sam, you called at just the right time. I would be glad to talk to this boy. Send Louis to me, say after school tomorrow if you can arrange it. I shall look forward to meeting him."

The next afternoon Louis arrived promptly for his interview. Shaking hands with this youth brought a response to Land that seemed to blend them into a common experience that would unite them for years to come. Louis radiated an honesty of character, a natural aptitude for leadership, and the grace of movement of the athlete. Frank thought, "If I had a son, I would want him to be just like this lad."

They talked for a while about school. Louis told him of his aspirations for a place on the track team, of his position as a pitcher on a baseball team, and in response to a question said, "I am a fairly good student. Even with the hard time we are having, I want to finish high school and then help with the education of the others."

Frank responded, "It is a good goal. You will meet the challenge. Now, tell me about your father. I knew him but only from very casual meetings."

Louis hesitated as though reluctant to look into the past but finally said, "My father was the finest father a boy ever had."

That evening, as Nell Land cleared the dinner dishes, she said, "Frankie, something happened today. You look like you have found a long, lost friend."

"Not a lost friend but a new young friend. This boy I talked to today is tremendous. One of the finest young men I have ever met. He is going to work with me in the office and I know I shall enjoy having him around. Perhaps we could take him to church with us Wednesday evening. The teachings of Christian Science would be good for him and you could meet Louis Lower."

"Yes, we should do just that," she said. "I suggest that you have him bring a few friends over to the apartment some evening. I would like to meet him."

It was not until the middle of February that the opportunity for such a meeting took place. "Louis," said Mr. Land, "who do you run around with?"

"I have some friends in my neighborhood," said Louis.

"How would you like to form a Club and meet here at the Temple?"

Louis thought the idea had possibilities and showed up the next week with eight other boys. That was February 19, 1919.

The boys came early that Wednesday evening and each in turn was introduced to Mr. Land by Louis Lower with, "I want you to meet Ralph Sewell, Elmer Dorsey, Edmund Marshall, Jerome Jacobson, William Steinhilber, Ivan Bentley, Gorman McBride, and Clyde Stream. There are nine of us."

They were a group destined to form a great youth organization and each was to advance through his efforts and determination to prominence in his chosen field of work.

Mr. Land acknowledged each introduction with a handshake and word of welcome. "Before we get down to business, let's make a tour of this building. I think you will find it just about right if we should decide to form a Club and use it as a meeting place."

It was a radiant group that gathered about the long table in one of the meeting rooms that night. There was no doubt that they should continue to meet as a Club. The only question was a name. One suggested they use Greek letters as the college fraternities did but this was instantly voted down as making them only a part of other organizations. The name must be distinctive and carry meaning. They turned to Land for suggestions. He pointed to a recent series of prints on the wall that showed the adventures of Sir Galahad and the Knights of the Round Table. There was a negative shaking of heads.

The greatest of wars had ended only a few months before and the adventures of knights of old seemed far away. Then names were mentioned from history and from the Bible. Stories such as Damon and Phythias, David and Jonathan and of Nathan Hale. Nothing seemed to click until one of the boys, Clyde Stream, said "Mr. Land, tell us something connected with Masonry. They must have great names and we are meeting here in one of their buildings."

Frank smiled, "This year I am serving as the head of one of the Masonic Groups. I am the Commander for the DeMolai Council of Kadosh. There are many names and stories directly connected with Masonry, but I think I should tell you about the last leader of the Knights Templar. His name was Jacques DeMolay or as they say in history books, James of Molay."

The story and the name caught the imagination of the boys. Here was heroism. Here was a great example of loyalty, of courage. Here was a theme from knighthood and chivalry, at its best, and the name of a martyr to fidelity and toleration. The boys were ready without further consideration to accept this name as the name of the group. But Land interrupted, "Now let's wait just a little bit and sleep over this. Let's not rush into it. Perhaps with a little more thought we can come up with a better name. One that might be more in keeping and more appropriate. It is growing late and you should all be going home. Come back next week and bring a few more of your friends. We will talk more together about it then. Good night and thanks for coming." 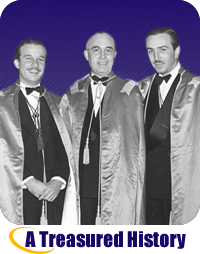 While the boys talked to Land about the Club when they came to the Temple, it was their long talks together at school and as they walked from school to home that heightened their interest and gave momentum to their organization. One afternoon after a chemistry class, Elmer Dorsey caught up with Louis Lower to ask, "Louis, I think this club idea is terrific. But what is it all about? What does Mr. Land get out of it? Do they want us to become junior Masons?" "I don't have all the answers, Elmer, I only know that Frank Land is one of the greatest. His only motive is the one he tells us. He likes to be with young people and sincerely believes that if we do form such a group each of us will benefit from it. How he ever talked the older boys into letting us use their temple is beyond me. They must be interested in us as Land is, because he has told me that we are not to be a junior Masonic group. He told me these men are concerned about only one thing and that is that we should grow into decent men who will be respected in the community."

March 24, 1919 was the day in history that launched the Order of DeMolay. During the next few years, however, the date of March 18, the date in the past that had witnessed the death of Jacques DeMolay, came to be more frequently used.

Thirty-one boys, all from the same high school, came to the Scottish Rite Temple that night. Frank Land made each boy welcome and then explained briefly his ideas of a Club. Land said, "This is your meeting. I will serve as Advisor but it is your meeting. Why not proceed with an organization and elect a few officers. I will take charge until you have completed your election."

During the next few months the group grew in numbers, in activities and interest. Then a fear came to some of them that they were growing into too large a Club.

Someone suggested that a committee talk with Mr. Land and endeavor to convince him that membership should be limited to 75. Land neither criticized or admonished the committee at the time. In fact they didn't know whether he agreed or disagreed to their suggestion.

Later when the meeting was called to order, the chairman reported and moved that the membership of DeMolay be limited to 75. The motion quickly received a second and was unanimously adopted. It was then that Dad Land rose from the back of the room where he had been more or less out of sight for he wasn't the type to take the spotlight, or the forefront in their meetings. He wanted them to conduct their own meetings.

As he came to the front of the room that night, he proceeded to tell them—and in no uncertain terms—how selfish and how inconsiderate they were. He told them that they were operating and thinking absolutely contrary to every idea that he had in mind for this organization. He reminded them that there were three other high schools in Kansas City which had young men who were just as capable, just as qualified, and just as upstanding as they were. In fact, he indicated he thought they were probably much, much better than what they thought they were. He said that if it was good for one boy, it must be good for all eligible boys. He reminded them that 'to become big, they must be big.' The motion to limit membership to 75 was rescinded. It was then that DeMolay was permitted to grow and develop.

And grew it did. DeMolay continued its growth initiating new member and instituting new chapters in all states of the continental USA. DeMolay then crossed the oceans and the organization was developed in many foreign countries. Thousands upon thousands of young men have had their life enriched by the rescinding of the motion to limit the Order of DeMolay to just 75 members.
This website is the official website of John Wayne Chapter#3667 Order of DeMolay and acknowledges the authority of and yields allegiance to DeMolay International, of which Frank S. Land was the founder.